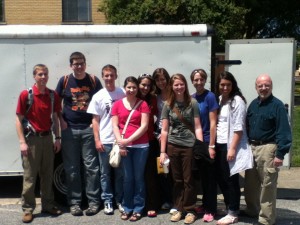 Well, here we go again. The usual meeting place, behind Nell Sunday. There’s the 15-passenger BJU van with a trailer—plenty of room for 10 passengers and their luggage. We load up, I distribute the passports and insurance cards, and since everybody’s on time, we’re ready to go. There’s a good-sized crowd of parents, grandparents and siblings saying their goodbyes, including one set of second-timers; Jordan’s brother Nate was on my first team in 2007, and their parents are here to see another one off.

We gather for prayer, and I manage to get through the emotion of it all. I’m always surprised when this whole thing comes together, and I’m eager to see the good that will come of it—in the team members themselves, in the Christian workers alongside whom we will labor and learn, in the folks to whom we’ll minister, in the families back home who pray and miss and anticipate a homecoming. Sometimes, during the planning stages, I feel as though it’s not worth it. But I’m always wrong.

Paul McCreedy is our driver. He’s a seminary student and a member of my church—and, as it turns out, a good driver. The trip is uneventful—well, almost. Outside of Atlanta, just north of Spaghetti Junction, we hear something rattling on the roof. Since there’s no luggage up there, or even a rack, we can’t think of anything it could be. Somebody suggests Spiderman, but of course that’s ridiculous; isn’t he in New York? So we pull off—into a QT, as it happens—and take a look. Turns out the molding at the top of the windshield has come loose, and the middle of it is flapping against the roof. It won’t snap back into place, but it won’t come loose either, so it’s not really a problem. Paul says he’ll get some duct tape on the way back. Surprised we don’t have some—we’ve got everything else, it seems.

Heading back onto the highway, we move through the highest point of Spaghetti Junction, a sight I haven’t seen before. I rattle off the sights in Atlanta—The Varsity, Georgia Tech, the Marriott Marquis, Turner Field—and we arrive at the airport right on time, 3:30 p.m. for a 5:30 flight. We get right through check-in, though Angel has to pay an overweight luggage fee. My bag comes in at 51 pounds, and the guy says that’s good enough. I’m a little peeved to learn that they’re allowing 2 free checked bags; the website says only 1, even for international flights. That seemed unusual to me—it’s always been 2 before—but I didn’t want to risk paying a hundred bucks each for 14 extra bags. So it turns out we packed lighter than we needed to. Good for us.

We come through security with no problems and are in plenty of time for our 5:30 flight. When we arrive at the gate, we meet up with Keri, who’s arrived ahead of us, and she tells us we just missed Robert, who’s on an earlier flight to New York. She also tells us that our flight is delayed until 7:30, but that the PTBs (that’s the Powers That Be, for those of you who don’t speak Acronym) assure us that we’ll be on time in NY to catch the flight to Accra at 10:30.

So we have 3 hours until our flight. Looks like we’ll eat here in Atlanta rather than New York, as I had planned. Good; it’ll probably be cheaper. We hit the food court. We split our options among the 3 best choices: Mexican, Southern, and Boar’s Head deli sandwiches. Everybody gets fed, and it’s all good.

Back to the gate, where we learn that the gate’s been changed. Well. We have good seats in the waiting area, the new gate is not far away, and we have plenty of time. We settle in at the old gate and chill.

Fifteen minutes before boarding, we head to the gate. The agent there pages our whole group and rechecks us; I don’t know why. Maybe confirming the visas for Ghana? We board without incident and find that we’re all seated together near the back of the plane. One big “fappy hamily.” The pilot tells us that we’ll be delayed for takeoff by air traffic control in New York, but I note that even with a 20-minute delay, we’ll be there an hour before the Accra flight takes off, so we’re good.

We sit on the tarmac, and then we taxi s-l-o-w-l-y, the pilot killing time. Then a burst of power. Wheels up at 8:01, runway 27R. ETA in New York, 9:50, 10 minutes before boarding begins for our flight. If the gate’s within a reasonable distance, we’ll be fine. And since we’re a group, I suspect they’ll wait for us anyway.

And then, everything goes nuts.

We land on time—which is to say, at 9:50, which is more like 2 hours late. We contact Joy, Katie and Robert by phone while we’re still taxiing. They can’t get through security without their passports, and they don’t think we’ll have time to get them to them. Quick planning: Keri will babysit my carry-on while I try to get the passports to the three. Since she can’t board with my carry-on, and since she can’t leave it behind when she does board, we realize that if I don’t make it, five of us will now miss the flight, and the other nine will be leaderless as they cross the Atlantic. Risky, but not unacceptably so, since Timothy Seidu and a missionary will meet them when they land in Accra.

I take off at a dead run through the airport, OJ style. (I mention that to the team later, and they don’t know what “OJ style” means. I’m too old for this.) I leave the secure zone and spring through the baggage claim and out onto the street, where I ask frantically, “How do I get back in to departures?” Several people point me down the sidewalk, around the corner, and up the hill. As I run, it occurs to me that I’m the leader of this team, and I have abandoned every single one of them. In New York City. Yikes.

I blast in to departures, and there’s Robert, and then Joy, and then Katie. Robert and Joy have their boarding passes; Katie needs her passport in order to get it. We scan it at the kiosk, and it says we’re too late—go to a desk agent. Which we do. Joy suggests that I head back through security and to the gate, so there will be a leader with each group. Great thinking, Joy. So off again, praying and panting, as fast as my 58-year-old legs will carry me. Through security—I’m the only passenger there, oddly enough. No time to put my shoes back on; I carry them and keep running. It occurs to me that I’ve never run through an airport in my socks before. After some misdirection, I find the gate, where Keri is waiting with my bag, and everyone else has boarded. The gate staff are quick and focused; they check my carry-on, since the plane’s overhead compartments are now full, and Keri and I board.

Whew. Then the flight attendant tells us that they’ll hold the plane for 20 minutes to give our other three a shot. I think, well, that’s it then. We’re all going to make it.

But we—they—don’t. The agent won’t issue a boarding pass to Katie because departure time is past—she apparently doesn’t know that they’re holding the plane for her. Joy and Robert, agents of grace, opt to stay with Katie. (Good call, kids.) On the phone Joy tells us that for now she and Katie are rescheduled for tomorrow night’s flight, same time. There are only two seats on that one, though, so Robert will need to either fly standby—not something we want to risk, with a 12-hour drive at the other end—or try to get some other airline’s flight into Accra. Joy says they can book him to arrive in Accra tomorrow night at 8:30.

So I’m leaving without part of my team.

Happened last time, in London. Come to think of it, Robert’s brother was one of the three we left behind that time. The Troutman curse.

But that one turned out OK, and I expect this one will too. We’ll have to leave Accra without them Friday morning; they’ll arrive in the early afternoon Friday, a few hours after we leave. We’ll have a missionary meet them at the airport—I hope, since I can’t contact him now until he meets us at the airport when we land—and take them to the guest house where we will have stayed the night before, and get them on the public bus that night for an all-night ride to Wa. They’ll arrive Saturday morning, just 12 hours after us, and maybe even in time for the graduation ceremony.

Not the end of the world. But not good, either. As we head across the Atlantic, leaving the lights of New York, America and home behind, I think through the situation and see any number of ways I could have prevented this. Most obviously, we all could have left Atlanta together. In retrospect, it really wasn’t worth saving a few bucks on airfare at the cost of leaving them in New York for a day. Second, I could have FedEx’ed (is that a word?) the three passports to them; the passports arrived Monday, and the flight was Wednesday, so that would have worked. Third, I could have ordered the visas earlier, so the passports would have been here before the end of the school year. Fourth, I could have . . .

We’ll see how it all turns out. Oddly, the cabin crew is serving dinner at midnight (4 a.m. destination time). We’ll eat and then go to sleep. Maybe I’ll try what Becca and I did in 2007: I sleep on the floor, she sleeps on the seats, so that we both get something resembling a bed. Catherine, who’s sharing this bench with me, says that might work.